This article is about Shakespeare's play. For other uses, see Henry V (disambiguation).

Henry V, one of William Shakespeare's plays, is his most famous "war play"; it includes the storied English victory over the French at Agincourt. Some of it glorifies war, especially the choruses and Henry's speeches urging his troops into battle. But we also hear bishops conniving for war to postpone a bill that would tax the church, and soldiers expecting to reap profits from the conflict. Even in the speeches of Henry and his nobles, there are many chilling references to the human cost of war.

Scholars believe Shakespeare wrote Henry V in 1599. It was published as a quarto in 1600. Among the sources are Raphael Holinshed’s Chronicles and an early play, The Famous Victories of Henry the Fifth.[1] 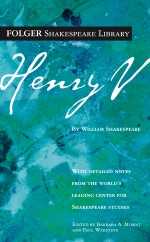 Henry V can be read online with Folger Digital Texts and purchased from Simon and Schuster.

The Folger owns at least 7 stand-alone translations of Henry V in various languages (not including collected works). Cataloging of these works is ongoing as of early 2015, and many have full-level catalog records, but some works still have only partial records. Translations can be found Hamnet in by searching for "Translations"in the Genre/Form Term field, or by searching the Call Number (Left-Anchored) field for call numbers starting with PR2796 (see the list of Sh.Col. translations call numbers for specific language call numbers). Since not all translations are fully cataloged, some items may only turn up in one of these searches.

Characters in the Play