After his first visit to the Folger in 1936, Paul began working closely with the Library's first reference librarian and curator, Giles E. Dawson (1903-1994). [2] Together, Paul and Dawson worked through Paul's large collection, creating a bibliography of Shakespeare's works printed in English between 1700 and 1864. During their appraisal of Paul's collection, the two men realized that the Folger lacked a large number of the volumes that Paul had collected, especially American printings of Shakespeare. Paul's comprehensive post-1700 Shakespeare collection and generous gift of almost 2,000 total volumes provided a strong basis for the Folger Shakespeare Library's holdings during the institution's early years. Paul donated the volumes over the course of three years, which ultimately provided a firm foundation on which the Folger could continue building its unparalleled collection of resources for scholarly study of Shakespeare. [3] According to the Folger annual reports, Henry Neill Paul wanted the fact of his donation to take a side line to the books themselves; however, his name was included on a bookplate in the donated volumes, "Gift of Henry N. Paul." Today, he is simply listed as a "Former owner" in Hamnet, making it easy to see his great contribution to the Folger's Shakespeare collection. 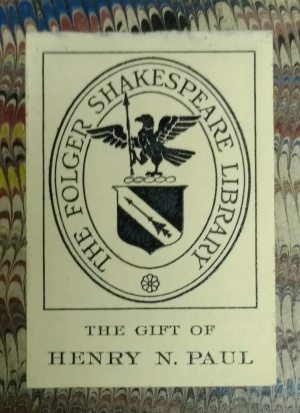