Difference between revisions of "Gilding Shakespeare: the Art of Decorative Bindings"

Louis B. Thalheimer Head of Reference, Georgianna Ziegler, curated Gilding Shakespeare: the Art of Decorative Bindings for The Curatorial Eye: Discoveries from the Folger Vault, part of the Exhibitions at the Folger.

“To paint the lily . . . is wasteful and ridiculous excess,” says a character in King John. But that is exactly what Victorian publishers did when they vied with each other to attract purchasers for the many editions of Shakespeare they issued. These colorfully-bound volumes were designed to catch the eye in bookstalls and to rest splendidly at home on parlor tables. The bindings range from commercial decorative cloth and fine vellum to a personalized binding constructed as a memento. 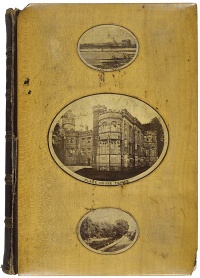 This copy of the popular “Chandos Classics” edition of Shakespeare was rebound by its owner. Photographs from summer resorts such as the hotel at Falmouth, and Place House, Fowey (Cornwall) were pasted on wooden boards and lacquered. Perhaps the owner had spent pleasant summer days reading Shakespeare at these locations.

The “Chandos Classics” Shakespeare sold more than 340,000 copies, but not in bindings like this, shown through the linked shelfmark PR2754 1i5 copy 2 Sh.Col.. This superb binding was specially made by the studio of Cedric Chivers, in Bath, England. Chivers invented the “vellucent” style of translucent vellum stretched tightly over watercolor, and in this case, mother-of-pearl. The stylized flowers are inspired by Art Nouveau design.

Not pictured is an edition of A Midsummer Night’s Dream illustrated by Alfred Fredericks, one of the founding members of the American Watercolor Society. The striking gold and black stamped designs on the binding show Titania, the fairies, and Bottom as an ass. They are based on Fredericks’ illustrations inside the book.

Another spectacular example is a Victorian parlor book produced and printed in Nuremberg, Germany. The image on the cover of Titania and the fairies—probably a chromolithograph on fabric—is inset into a lavish border of cream paper embossed in gold with flowers, butterflies, more fairies, and the slightly sinister figure of Puck at the bottom.

Head of reference Georgianna Ziegler discusses two "Chandos Classics" bindings—one personalized with photographs in "Resorting to Shakespeare" and the other styled in the Art Nouveau tradition in "Vel-luminous".