Genre/form terms in catalog records describe what an item is (or contains), not what it is about. Genre corresponds roughly to the content of what is being described: for example, almanacs, depositions, plays, and poems. Form corresponds with formats and physical characteristics: for example, embroidered bindings, imposition errors, manicules, and sammelbands. This Hamnet record for two copies of a 1635 edition of Sternhold and Hopkins Whole booke of Psalmes includes the genre term Psalters and the form term Embroidered bindings (Binding). Genre/form terms are controlled by authorized forms.

Due to the limits of the card catalog, genre and form terms were not systematically recorded by early catalogers. Shelflist cards - usually 3" x 5" index cards - did not have much room anything besides title, author, and publication information, and maybe a few subject headings or free-text notes. Libraries often maintained separate card catalogs for books, manuscripts, and other materials, which decreased the need for additional genre access.

The advent of the MARC standard, however, allowed librarians to expand their item descriptions: catalogers could add as much descriptive information as needed to fully describe a book (or at least, they were constrained by computer processing power rather than the dimensions of the catalog card). The original MARC specification did not include a specific field for genre and/or form terms, but two were added during the 1980s: 655 (Index Term--Genre/Form) and 755 (Added Entry--Physical Characteristics). Due to some confusion over how these two fields were indexed, and how to differentiate which information went in which, the 755 field was officially made obsolete in 1995 in favor of the 655 field, which is still in use today.

The Library of Congress Subject Headings (LCSH) is a controlled vocabulary set that was developed in 1898 (and has been regularly updated since) to be used broadly across many types of libraries. However, they are were originally meant for use only as subject headings, not genre terms; in other words, they describe what an item is about (dinosaurs, jewel heists), not what genre it belongs to (short stories, horror movies) or what form it takes (carousel books, calendars).

As libraries began to provide additional access to genre and form information, catalogers found attempted to find work-arounds to use LCSH headings as genre/form terms. Some added applicable subject headings to the 650 field (for subjects), even though that implied that an item was about a topic rather than an example of a topic (such as Haunted house films). Others added subject headings to the 655 field as genre/form terms, although this practice was not officially implemented until 2002. Subfield ‡v was added to the MARC standard in 1995 to adapt subject heading fields for genre and form access as well. The ‡v indicates a genre/form term: "Pictorial works" indicates that images are a central part of an item, and "Early works to 1800" indicates that the item is a work printed or issued before 1800. Even though the items being described are not necessarily about pictures or early modern printing, they are examples of those things. For instance:

tells a user that an item is about William Shakespeare, but nothing more. In comparison,

tells the user that the item is about Shakespeare, and it is in the form of a calendar. A popular term in the $v subdivision is Specimens, which can be used to adapt most noun-based subject headings into genre or form headings (i.e. 650 _0 ‡a Swords ‡v Specimens or 650 _0 ‡a Crows ‡v Specimens).

Around 2010, the Library of Congress began to separate out the genre terms from LCSH, and establish them as a separate list, Library of Congress Genre and Form Terms (LCGFT). LCGFT headings are a controlled vocabulary specifically meant to be used in the 655 field as genre/form terms. Some headings, such as Ten-minute plays, are established in both LCSH and LCGFT - an item can be either about ten-minute plays, or an example of a ten-minute play (or both, for that matter).

As the development and implementation of the MARC standard allowed catalogers to record more information than ever, specialized library communities began to brainstorm how to take advantage of the opportunities offered by the new standard. A 1979 IRLA report, "Proposals for Establishing Standards for the Cataloguing of Rare Books and Specialized Research Materials in Machine-readable Form," proposed the creation of MARC fields for literary genre headings and physical characteristic terms (later merged into a single field - see above), and included a draft thesaurus of genre terms. This thesaurus was finalized and published as Genre Terms: A Thesaurus for Use in Rare Book and Special Collections Cataloguing in 1983. Throughout the next decade, additional thesauri for physical and provenance terms were developed and released as well. [1]

Today, RBMS maintains six thesauri of genre and form terms; all are openly available on the RBMS website, and planning is currently in process to make them available as linked data.

Since the RBMS controlled vocabularies were developed specifically to meet the needs of the rare book community, they are heavily used at the Folger. They are the preferred vocabulary for Vault cataloging, and are sometimes used for open stacks materials as well.

Genre and form use at the Folger

Hamnet has several built-in ways to search for items by their genre and form. 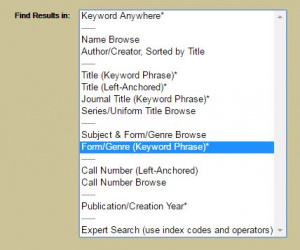 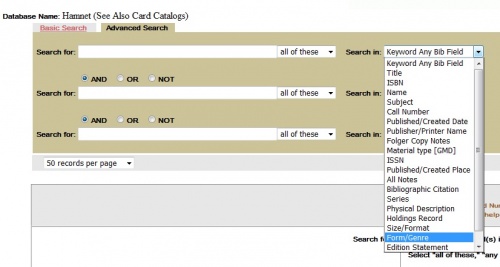 Conventions for maintenance of the table