Folger Theatre performs a season of innovative productions designed to forge strong connections with modern audiences, continuing the lively legacy of William Shakespeare. While Shakespeare's plays are central to its mission, Folger Theatre has produced a variety of other classical works, as well as new plays related to the Folger collection or inspired by Shakespeare. Folger Shakespeare Library, opened in 1932, featured the first replica in North America of an Elizabethan theater, a 250-seat space designed to suggest the innyard playing spaces. Founders Henry and Emily Folger envisioned it as a place for the performance of the plays in Shakespeare’s style, and the first nationally televised broadcast of a Shakespeare play in the US was Julius Caesar from the Folger stage in 1949. Folger Theatre produces seasons of Shakespeare, other plays from the period of the Folger’s rare collection, and new work, including commissions, inspired by the period. Including award-winning stagings of more than 70 percent of Shakespeare’s canon, as well as classical and Restoration work, Folger Theatre premiered the original Shakespeare for My Father, Lynn Redgrave’s reminiscence of her theatrical family, as well as Roger Rees’ What You Will; co-produced Teller and Aaron Posner’s magical Macbeth, released on video; was the first Washington venue to present a production from Shakespeare’s Globe; and has collaborated with the Classical Theatre of Harlem, the Oregon Shakespeare Festival, The Guthrie, Hudson Valley Shakespeare Festival, and other theaters across the country. Folger Theatre is the recipient of 30 Helen Hayes Awards including for Outstanding Resident Production for Sense and Sensibility, The Taming of the Shrew, Hamlet, and Measure for Measure. 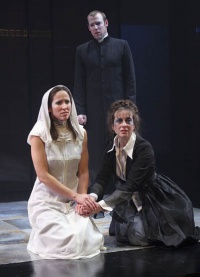 Janet Griffin has been Director of Public Programs for the Folger Shakespeare Library since 1992. She has produced 85 plays, including 30 Shakespeare plays, for which Folger Theatre has been recognized with 146 nominations and 30 awards for excellence in acting, direction, design, and production from Washington's Helen Hayes Awards. Among new work she has developed at Folger was Lynn Redgrave’s solo show, Shakespeare for My Father, which in final development toured internationally and earned Redgrave a Tony Award. Responsible for the Folger Shakespeare Library’s season of performing arts and cultural events, she has overseen the growth of the Folger Consort early music series and developed contemporary literature and lectures at Folger, including the O.B. Hardison Poetry Series and Folger’s partnership with the PEN/Faulkner Foundation, bringing the country's most renowned writers to the Washington, DC area.

Visit the Folger Box Office to order your tickets for the 2019-2020 season.