Folger Friday: A Viennese Ball, one of the Talks and Screenings at the Folger, was held in the Paster Reading Room of the Folger Shakespeare Library on Friday, November 15, 2019 at 6:00pm. 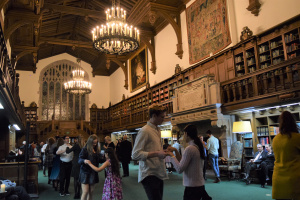 Alongside Folger Theatre's production of Amadeus, audiences were invited to a pre-show lesson in Viennese Waltz led by local "Tanzmeisters" Herbert and Carol Traxler.

Though now synonymous with grace and class, the Waltz was hugely controversial when it first hit European high society in the late-18th century. For the first time, dancers formed a "closed hold" and spun wildly around the floor in this embrace. Its popularity grew, leading to the opening of a new kind of establishment: public dance halls. At the epicenter was Vienna, boasting some of the largest ballrooms and a handful of composers transforming country folk music into lively, danceable hits.

Dancers learned essential Viennese Waltz steps, posture, and etiquette, as well as gained an introduction to the Viennese ball culture and traditional music of the Strauss dynasty. 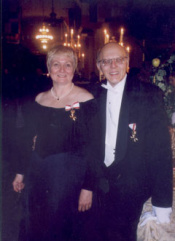 Carol and Herb Traxler met as fellow members of the Washington Saengerbund, a DC-based German folksinging group. Since becoming "Tanzmeisters," they have taught the Viennese Waltz to thousands of Washingtonians, counting venues such as the Meridian House, Smithsonian, Kennedy Center, White House, Austrian Embassy, and even former first daughter Chelsea Clinton among their illustrious clientele.

In 1998, they were honored by the Republic of Austria with the Decoration of Merit in Gold (Goldenes Verdienstzeichen). They currently reside in Maryland, though they make regular trips to Austria for the annual Ball season.