Emily Clara Jordan Folger (May 15, 1858-February 21, 1936)[1] was born in Ironton, Ohio.[2] Her mother was Augusta Woodbury Ricker, and her father, Edward Jordan, a newspaper editor and lawyer, served as Solicitor of the Treasury during the Civil War. He once took young Emily to meet President Lincoln in the White House. 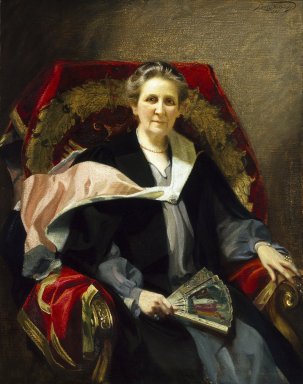 Portrait of Emily Jordan Folger in her Vassar College robes. Portrait by Frank O. Salisbury which hangs in the Old Reading Room at the Folger Shakespeare Library. Hamnet record for FPb58.

Emily grew up in Flushing, Long Island, with her sisters Mary and Elizabeth and brother Francis. The sisters went to the reputed Miss Ranney's School in Elizabeth, New Jersey, after the family relocated. Emily graduated Phi Beta Kappa from Vassar, and eventually earned a master's degree in the English department there.

At Vassar, Emily was chosen president of her class of thirty-six women. Her top academic subjects were English composition, French, and astronomy. Close behind ranked botany, chemistry, math, and English criticism. Beyond her academic prowess in both science and letters, her college scrapbook reveals many extra-curricular interests: she saved scores of musical and theatrical programs, participated in debates, and attended class "sociables" and dances. 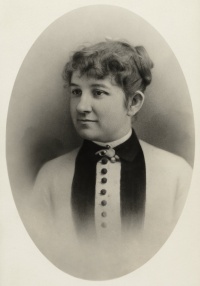 Upon graduation in 1879, Jordan took a job in the collegiate department at the Nassau Institute, Miss Hotchkiss's school "for young ladies and children" in Brooklyn. She taught a wide range of literary and scientific subjects at four grade levels. She left the teaching profession in 1885 to marry the Brooklyn native Henry Clay Folger, a merchant in the oil business. Folger's background was similar to Jordan's: after attending the distinguished Adelphi Academy in Brooklyn, he had graduated Phi Beta Kappa from Amherst College in 1879, with pronounced interests in English language and literature, debating, theatre, and music. Both practiced the Protestant religion, attending and supporting the Congregational Church most of their lives. Emily taught Bible school and through her church supported a war orphan in France. The Folger's marriage was childless; it ended with Henry's death in 1930 following an operation in a Brooklyn hospital.

The culmination of her later years was April 23, 1932. On this day, Shakespeare's 368th birthday, Emily handed over the keys of the newly built Folger Shakespeare Library to the Board of Trustees of Amherst College, which would administer it. The Folgers, in a marriage described as "happy and affectionate," pursued for forty years, with single-minded determination, the objectives of acquiring the largest possible collection of Shakespearean and Elizabethan literary works, overseeing the design and construction of a magnificent building to house it one block from the Capitol, and providing an endowment to fund library management and expansion. The achievement is unparalleled in the history of American philanthropy. For more on the Folgers' passion for acquiring Shakespeariana, read A Shared Passion: Henry Clay Folger, Jr. and Emily Jordan Folger as Collectors, one of the past Exhibitions at the Folger.

The Folgers' method of acquisition of their Shakespearean library was mainly through auction sales in London and New York, where they were represented by book dealers or agents. Emily would read through the book auction catalogs delivered by mail, turn down the page corner and make wavy lines in the margins of the items she thought the couple should obtain. In the evening, after a day at the office, Henry would go over his wife's recommendations and develop his bid list, indicating how high for any one item his agent could bid on his behalf. Emily would keep an up-to-date catalog of acquisitions, including record of cost and mention of any imperfections in the copy, as they might later seek to obtain a better one. When the Brooklyn home became full of books, Emily rented space in storage warehouses in Brooklyn and Manhattan.

After a few years of marriage and after Henry had started purchasing the rare Shakespeare titles, Emily decided to study for an advanced degree. With a course of study prescribed by the Shakespearean scholar Horace Howard Furness, she was accepted into a master's program at Vassar. In 1896, she received a letter from her alma mater: the faculty had approved her thesis on "The True Text of Shakespeare", and "the committee…expressed itself as greatly pleased with it." Her final exam was on The Tempest. Subsequently, Emily's role grew from that of a facilitator in the acquisition of literary works to that of the recognized Shakespearean scholar in the couple. Nor was that the end of Emily's writing career. She published poems and whimsical tales in the magazine, The Outlook, and gave talks in a literary society she joined in New York City, the Meridian Club. Initially they addressed specific aspects of Shakespeare. After Henry's death, she spoke to the same audience on "The Dream Come True," the story of the library and of Henry Clay Folger. Vassar invited Emily to speak at the jubilee celebrations in 1915. For many years, she had solicited views of Shakespearean actresses and women writers of how they had become interested in Shakespeare or how they interpreted Shakespeare, and her address was entitled "Some Women Interpreters of Shakespeare."

Emily Jordan Folger kept a play diary from 1906 until 1930, during which period she offered a wide-ranging analysis of 125 Shakespearean performances (some in Italian, French, and German) that she saw in New York, and occasionally in Stratford-on-Avon. Often she would go to the matinee performance with family and friends, and Henry accompanied her to half of them. Several times she returned a week or so later to see whether the performers had benefited from criticism they had received. She recorded the names of the actors and actresses, noting which actors "caught the spirit of the play," observing the quality of the voice, the glibness of speech, eye contact, mobility of face, and commenting on whether the costumes were "well-colored" and "historically accurate," she determined if the scenery was "poor" or "elaborate," whether the waits were long, if the actors were well made up, which actors required prompting, and counted the "lispers" or actors with deficient elocution, and, rating the quality of the orchestration, she set down what the critics (often the celebrated Edwin Winter) wrote in the press about the theatrical interpretation, how full the house was, how many encores there were. Emily even recorded remarks by people sitting near her.

Emily Jordan Folger was honored in 1932 when Amherst College conferred upon her an honorary doctorate. The citation read: "Emily Clara Jordan, graduate of Vassar College, through many years the enthusiastic, tireless, and discriminating companion of Henry Clay Folger in the collection of a unique library of the works of Shakespeare; generous benefactress of Amherst College and of the lovers of letters throughout the whole world; the degree which 18 years ago Amherst College appropriately bestowed upon your husband it now, with the same hood as symbol, confers upon you, as I create you a doctor of letters."

In this act, Amherst was recognizing Emily's contribution to the college as much more than that of being the wife of an Amherst alumnus. She was an equal partner with her husband in developing the Shakespeareana collection. And when he died in 1930––before the library was finished––Emily supervised the completion of the structure on 201 East Capitol Street on Capitol Hill and the installation of the collection, and she assisted with the hiring of staff and with organizational decisions. When the funds left Amherst in Henry Folger's will proved insufficient due to the effect of the Great Depression, Emily made substantial financial donations from her own inheritance to assure the library a solid endowment. At her death, the bulk of her estate went to the library.

On April 28, 1936, her ashes were placed next to those of her husband in a mortuary urn niche in the wood-paneled Reading Room in the Folger Shakespeare Library, behind a bronze tablet on which is engraved, "To the Glory of William Shakespeare and the Greater Glory of God."[3] On either side of the tablet are displayed large oil portraits of Emily and Henry Folger painted in 1927 by the British portraitist, Frank O. Salisbury.