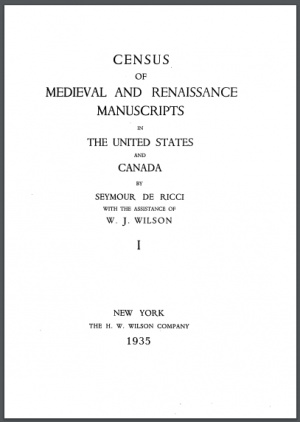 A card file of de Ricci entries with their corresponding Folger call numbers can be found in the little room to the left of the main card catalog room.

To find manuscripts by de Ricci number in Hamnet, do an Advanced Search of the "Bibliographic citation" field with the words "Ricci" and "manuscripts" in one box, and the number as a phrase in another box. Alternatively, put everything in one search box, but be aware that Hamnet will replace the decimal point with an "AND" when searching, so will sometime bring up two records (e.g. searching for de Ricci 61.1 will also bring up the record for de Ricci 1.61).