This article collects the children's exhibition material featured in David Garrick, 1717–1779: A Theatrical Life, one of the Exhibitions at the Folger.

Many Faces of Garrick

David Garrick was known for his many facial expressions and his natural acting style.

This link takes you to a fun activity wheel showing more faces of Garrick.

An artist named William Hogarth designed this chair and gave it to David Garrick to display in honor of William Shakespeare. Many people think that the objects carved into this chair represent different types of plays. For instance, the dagger and sword could represent Shakespeare's tragedies.

How many different things can you find carved into the chair?

What types of Shakespearean plays do you think they represent? 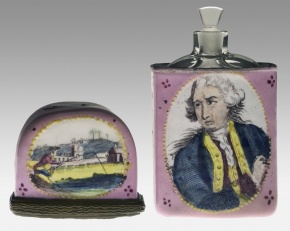 David Garrick was one of the first real celebrities. People would travel great distances to see him perform onstage. Garrick was good at promoting himself and his face can be found on many objects in the exhibition like the ones below.

If Garrick were alive, where do you think we would find his face today?

Think of three different modern objects that Garrick might appear on or advertise. Try drawing these objects with Garrick's image.

Do you see any similarities with the way famous actors advertise products today?

David Garrick's most famous role was that of Hamlet.

Garrick was involved in all aspects of the theater. He even cut lines and edited plays. In Hamlet, Garrick changed the scene in which Hamlet's mother, Queen Gertrude, dies from accidentally drinking poison. Instead, Queen Gertrude exclaims, "Save me from my son!" and swiftly exits.

Do you see Hamlet or the King differently in Garrick's version?

Is the scene more or less tragic if Queen Gertrude lives?

Garrick Behind the Scenes

David Garrick was also involved in the technical aspects of theater, including stage lighting. Typically, theaters in England at this time were lit by a chandelier directly above the stage, seen here in this image. This made the audience more visible. The audience was also allowed to sit on the stage and comment on the performance.

Garrick moved the lighting out of sight and made the audience sit off stage, in the dark.

Stage managers use prompt books to mark when characters enter and exit and where they stand on stage. This picture shows a prompt book from the eighteenth century.

Click here to read a scene from the Folger edition of Hamlet.

You will see that all the stage directions have been removed. Imagine the scene in your mind as if you were watching it. Think about the places it would make sense for the characters to enter and exit and move across the stage. Try printing out the scene and writing in your own stage directions.