Difference between revisions of "Cultural Cross-Currents of the Nineteenth Century"

Manuscript catalogers Kathleen Burlingame, Stephanie Fell, and Nadia Seiler curated Cultural Cross-Currents of the Nineteenth Century for the The Curatorial Eye: Discoveries from the Folger Vault, part of the Exhibitions at the Folger. 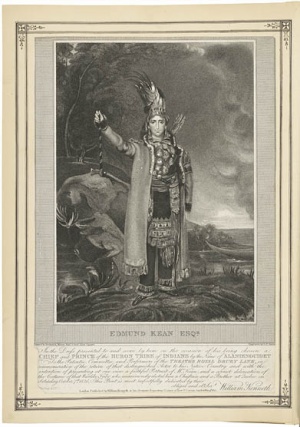 Interest in William Shakespeare as both poet and playwright intensified throughout the nineteenth century on both sides of the Atlantic. In Great Britain, this period was marked by increasingly elaborate stage productions and the rise of actors such as Edmund Kean and William Charles Macready. The image to the left is actor Edmund Kean dressed in the Huron costume given to him by several Wyandot chiefs. Literary and scholarly attention increased as well, as the purview of academia moved beyond the confines of the ancient classics to include English vernacular literature. At the same time, traveling Shakespearean acting troupes roamed the wagon trails and waterways of the American frontier, while urban opera houses and working-class theaters were filled with applause for visiting players and the home-grown talent of American actors such as Edwin Forrest.

The manuscripts in this case were recently discovered in a large collection of correspondence that is currently being cataloged as part of a grant from the Mellon Foundation. They include a letter from novelist George Eliot to Oscar Browning (who went on to write her biography in 1890), a letter from James Howard on the Astor Place Theatre riot in New York City in 1849, a letter from Shakespearean actor Edwin Forrest to his mother reporting his withdrawal from an acting engagement at Drury Lane, a farewell address given by Shakespearean actor, Edmund Kean, and a letter between Shakespearian actor Edwin Booth and scholar Asa Fish, discussing Hamlet.

Listen to manuscript cataloger Nadia Seiler explain this unusual story in "Hail to the Chief" by clicking the linked heading.