Difference between revisions of "Coriolanus"

Set in the earliest days of the Roman Republic, Coriolanus, one of William Shakespeare's plays begins with the common people, or plebeians, in armed revolt against the patricians. The people win the right to be represented by tribunes. Meanwhile, there are foreign enemies near the gates of Rome.

The play explores one reason that Rome prevailed over such vulnerabilities: its reverence for family bonds. Coriolanus so esteems his mother, Volumnia, that he risks his live to win her approval. Even the value of family, however, is subordinate to loyalty to the Roman stage. When the two obligations align, the combination is irresistible.

Coriolanus is so devoted to his family and to Rome that he finds the decision to grant the plebeians representation intolerable. To him, it elevates plebeians to a status equal with his family and class, to Rome's great disadvantage. He risks his political career to have the tribunate abolished--and is banished from Rome. Coriolanus then displays an apparently insatiable vengefulness against the stage he idolized, opening a tragic divide within himself, pitting him against his mother and family, and threatening Rome's very existence.

Coriolanus may have been written in 1607-08; the text alludes to "coal of fire upon the ice," a likely reference to the Great Frost of that winter, during which the Thames froze and coal was burned on the ice in containers. It was published in the 1623 First Folio. Sources include North's translation of Plutarch's Lives, William Averell's A Marvelous Combat of Contrarieties, Sir Philip Sidney's An Apology for Poetry, William Camden's Remains of a Greater Work, Concerning Britain, and others.[1] 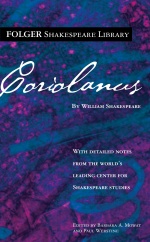 Coriolanus can be read online with Folger Digital Texts and purchased from Simon and Schuster.

The Folger owns almost 70 stand-alone translations of Coriolanus in various languages (not including collected works). Cataloging of these works is ongoing as of early 2015, and many have full-level catalog records, but some works still have only partial records. Translations can be found Hamnet in by searching for "Translations"in the Genre/Form Term field, or by searching the Call Number (Left-Anchored) field for call numbers starting with PR2796 (see the list of Sh.Col. translations call numbers for specific language call numbers). Since not all translations are fully cataloged, some items may only turn up in one of these searches.