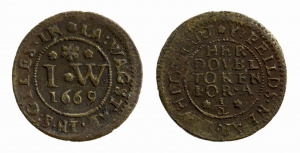 Token of the White Hart (H-P Lyttle Boke no.8)

The Folger collection contains approximately 400 coins, tokens, and medals. Like the rest of the collection, they either date to Shakespeare's era, or relate to Shakespeare (or both, as is the case with this 17th-century token of the "White Hart" that James Orchard Halliwell-Phillipps collected because it's "the name of an inn (though not the identical one) mentioned by Shakespeare.")

The coins, tokens, and medals that have (so far) been cataloged in Hamnet can be found by searching each of those terms as a "Genre/Form" keyword.

Folger catalogers use the genre/form term coins (money) for "Pieces of metal stamped by government authority for use as money."[1] Coins in "Coin" envelopes are arranged in numeric series. It isn't known when the system was developed, but series 100 through 600 were in place by the 1970s or 1980s. In 2019, a 7th series was added to cover coins from antiquity.

Folger catalogers use the genre/form term tokens (exchange media) for "substitutes for money that move within a limited universe, usually not in general circulation, may be exchanged for particular goods or services, and are made from hard substances whose intrinsic value is always less than the stated value.">[2] This includes theater admission tokens (sometimes incorrectly called "tickets"), tradesmen's tokens, and "Condor" tokens (such as the London & Middlesex halfpenny featuring a bust of Shakespeare) Before 2019, tokens housed in envelopes were generally mixed in either with coins or with medals. They are now being arranged in numbered "Token" envelopes.