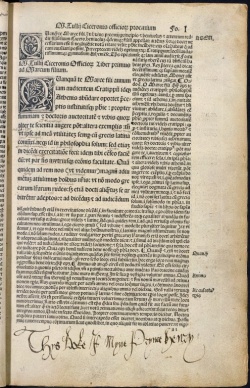 The boy who would become King Henry VIII wrote “Thys boke is myne Prince Henry” in this copy of Cicero's writings from 1502; see the Hamnet record for more information. Although the writing is undated, Henry would have been about eleven—then considered a fine age to study Cicero—when the book was new. Annotations and glosses in two hands, identified by some as the writing of Prince Henry and his tutor, the poet John Skelton, appear on other pages of the book as well.

Cicero and other classic Roman prose writers formed the crux of the sixteenth-century curriculum, and were almost certainly studied some decades later by young William Shakespeare in the village grammar school at Stratford-upon-Avon. (His opinion of the era's dry, laborious instruction may be inferred from the description in As You Like It of "the whining schoolboy...creeping like snail unwillingly to school.") 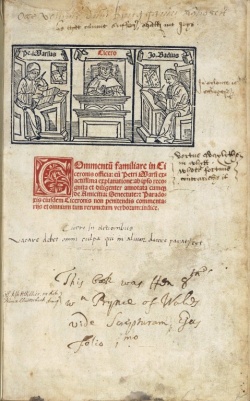 In their compositions, which were also in Latin, students were encouraged to aspire to Ciceronian purity of language. Cicero's writings have left their mark to this day on the study of ethics, political thought, oratory, logic, and rhetoric, and his works remain a valuable source of historical information on Roman life and times.