The O.B. Hardison Poetry Series presented Begin Again: Sharon Olds on October 17, 2016 at 7:30pm in the Folger's Elizabethan Theatre. Praised for her “vigorous and fecund metaphorical imagination” (American Book Review), celebrated poet Sharon Olds read from her work. The post–reading conversation was moderated by Sarah Browning, who was the Executive Director of Split This Rock, a biennial poetry festival of witness and provocation. 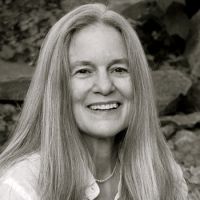 Sharon Olds is the author of eleven volumes of poetry, including her latest, Odes. Her numerous awards include the 2014 Donald Hall-Jane Kenyon Prize in American Poetry; the T.S. Eliot Prize and the 2013 Pulitzer Prize for Poetry for Stag’s Leap; and the Lamont Poetry Selection and the National Book Critics Circle Award for The Dead and the Living. Olds is a Chancellor of the Academy of American Poets.

and draw myself back, out of there, where

desire and joy, where ignorance, where

touch and the ideal, where unwilled, yet willful

blindness—once a year, I have mercy,

I let myself go down where I have lived, and then,

hand over hand, I pull myself back up.

From Stag’s Leap by Sharon Olds© 2015, published by Alfred A. Knopf. Used with permission.