A Shared Passion: Henry Clay Folger, Jr. and Emily Jordan Folger as Collectors was part of the Exhibitions at the Folger. Major support for this exhibition came from The Winton and Carolyn Blount Exhibition Fund.

Henry Clay Folger, Jr. (1857–1930) and Emily Jordan Folger (1858–1936), throughout their married life worked together to build the collection that became the foundation of the Folger Shakespeare Library. The Folgers took as their purview all things Shakespearean—the books, pamphlets, documents, and manuscripts for which they are best known and that constituted the principal part of their acquisitions, as well as pictures and art objects. Their shared passion for collecting fulfilled the Folgers' need for a larger purpose in life. Inevitably, their vision of the collection evolved into that of an institution dedicated to the benefit of scholarly investigators and the nation.

A Shared Passion shows this pair of collectors, otherwise known only as extremely private personages, as they actually functioned, exercising the taste that guided them and employing the techniques at their command. Here, through their relations with dealers grand and modest and with other collectors antecedent and contemporary, and by their purchases large and small, magnificent and moderate, the Folgers emerge as sympathetic and admirable personalities.

The Shakespeare Folios, the four earliest complete editions of Shakespeare's plays, published in the large, folio format, were the core of the Folgers' Shakespeareana.

"The most precious book in the world" is what Mr. Folger called the Vincent Copy one of several copies of the First Folio (1623) shown in the exhibition, but the phrase can as well be taken as denoting the Folgers' evaluation of all of the early folio editions.

"This remarkable gathering of the Folios," wrote bookseller Dr. A. S. W. Rosenbach, "form almost a complete library in themselves." View one copy of the First Folio in high-resolution in the Folger's Digital image collection. 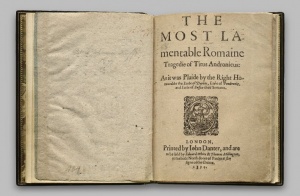 The title page of the 1594 Titus Andronicus quarto, a unique copy held by the Folger. Folger Digital Image 5696.

"Cable immediately two thousand pounds." Thus the climax, if not the conclusion, of the quickest of all possible negotiations for the purchase of the first Quarto (1594) of the earliest of Shakespeare's tragedies, Titus Andronicus — no other copy of which is known.

Meanwhile though, Folger had seen notice of the book in New York and had cabled Sotheran to immediately send a representative to Sweden to negotiate the purchase. The firm dispatched their chief buyer overnight to Sweden and cabled Folger: "What utmost offer will you make?"

As Folger recalled later: "That was a poser for an enthusiast, whose means did not match his interest. It took three hours of tramping over city streets to clarify a bewildered mind sufficiently to cable the answer, "Two Thousand Pounds." Sotheran replied: "Representative in Sweden may need cash tomorrow ... doubtful two thousand enough." Then, the next day, came the word: "Bought. Cable immediately two thousand pounds." Folger complied and the next day received confirmation: "Cash received and telegraphed. Will post quarto when received."

The negotiations had been concluded in ten days. On February 16 the book duly arrived in New York. The success of the negotiations was due as much to Sotheran's initiative as to Folger's decisiveness.

Writing of Mr. Folger as a collector, Dr. A. S. W. Rosenbach pointed out that "not content with the literary side, Mr. Folger interested himself also in the artistic"—in paintings and in objects, of artistic, sentimental, and associative value.

Among the five paintings featured in A Shared Passion is Henry Fuseli's dreamlike 1793 painting, Macbeth Consulting the Vision of the Armed Head. This painting is one of the finest examples in the Folgers' collection of the literary illustrations of Shakespeare, a vision of a passage in his writings by an artist, which never could be performed on the stage.

The well-read Swiss painter Henry Fuseli, who worked in London, elevates this scene in Macbeth—his favorite Shakespeare play—to the level of the fantastical. Fuseli considered the picture one of his "best poetical conceptions," and critics have named it his greatest artistic achievement.

The painting passed into the London art trade at the auction of actor Sir Herbert Beerbohm Tree's collection in September 1921, eventually reaching Mr. Folger in December 1922 via the London bookseller Maggs.

Little known now except as a political cartoonist, Thomas Nast was a well-trained artist who also painted in oil, and he was a thorough devotee of Shakespeare. Henry Irving, the English actor, commissioned a painting, now lost, for which this one is a study.

The figures of Tragedy, kneeling, and Comedy, standing in armor, sword in hand, are depicted in the room where Shakespeare was born. They offer laurel wreaths to his dramatically lit image, based on the bust of Shakespeare in Holy Trinity Church, Stratford-upon-Avon. A version of the Stratford bust is centered on the wall of the Folger Old Reading Room.

Mr. Folger bought The Immortal Light of Genius in 1908 at a sale in New York of Nast's effects.

The Folgers as collectors

Over the years of Mr. Folger's collecting, booksellers developed mutually beneficial relationships with him. As an active buyer and always businesslike client, Folger became a favorite and favored customer.

Mr. Folger used the alias "Golfer" to maintain confidentiality in transatlantic cables. In correspondence alerting Mr. Folger to the availability of a collection, the London booksellers Sotheran noted: "We are also in receipt of your favour of the 31st. ult. ordering a box of Ace Golf Balls, and it is receiving our best attention."

According to Mrs. Folger, "Henry was a favorite companion ... on the golf links" of his chief at Standard Oil, John D. Rockefeller, Sr. "Not a talented player," Mrs. Folger recalled, "Henry nevertheless was keenly interested in the game, and it is on record that he invented a new variety of putter for playing." He demonstrates his invention in the photo featured in the exhibition. 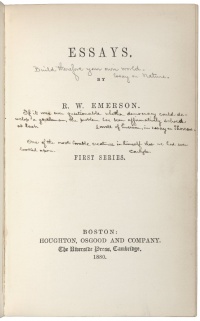 The Influence of Emerson

Build therefore your own world.

Thus, with a quotation from Ralph Waldo Emerson's "Essay on Nature", Henry C. Folger, Jr., recent graduate of Amherst College, class of 1879, inscribed his copy of Emerson's Essays published in Boston in 1880.

Emerson's writings on the American national character and on Shakespeare as a moral exemplar guided Folger's contemplation of the formation of his own character and intensified his fascination with Shakespeare. Reading and thinking about reading were integral to Folger's self-definition of a larger purpose in life, which eventually manifested itself in the creation of his Shakespeare library.

A Shared Passion features the set of commonplace books in which Folger—and later after their marriage Mrs. Folger—recorded their thoughts on their reading.

Mr. Folger formally recorded in his will the fact that the Folgers' collecting was not only a shared passion but in practice a joint undertaking. "My wife," the document reads, "has from the beginning aided me greatly with her advice and counsel."

Mrs. Folger acted as a Shakespearean in her own right, earning early in her married life a master's degree by writing a thesis on the text of Shakespeare and occasionally thereafter delivering papers on Shakespearean topics.

When Mrs. Folger appealed to the eminent editor Horace Howard Furness for advice on researching a thesis on the text of Shakespeare, he complained of being too busy to "set forth any detailed course of study." Then, inspired by the commonality of their interests, he proceeded to recommend an extensive bibliography. Furness was particularly pleased by the fact that his correspondent's studies were a shared undertaking with her husband.

Congratulating Mrs. Folger on the completion of her studies, Furness commented: "The picture you draw of working with your husband moves me deeply." He invited them to visit: "It will give me keen pleasure to welcome you both at any time."

In the portrait by Frank O. Salisbury, Mrs. Folger wears the hood of the M.A. that she earned from Vassar College in 1896 for her thesis on "The True Text of Shakespeare." The fan she holds, decorated with a scene from Cymbeline, is owned by the Library. This portrait, and its companion painting of Mr. Folger, normally preside over the Folger Reading Room. Both portraits are on display in A Shared Passion, as is Mrs. Folger's thesis and her correspondence with Furness. Throughout the exhibition are detailed notes made in Mrs. Folger's hand, analyzing purchases like their first extensive acquisition, the Warwick Castle Shakespeare Library, and catalogue records of the collection. As Mr. A. G. Welsh, Folger's longtime secretary wrote retrospectively in 1930, "There has been no Librarian, nor a staff of any kind. With Mrs. Folger's and my help we have gotten through."

By 1928 Mr. Folger had decided to locate the collection permanently in Washington.

Informing Herbert Putnam, Librarian of Congress, of his decision, he termed the collection—with both uncharacteristic exuberance and justifiable pride—a "library of Shakespeariana finer than anything that has ever been acquired."

Putnam thrilled to the prospect, "not merely for the National Capital, but for the cultural interests of this country." Putnam, who aspired to make Washington a center of scholarship, hailed the news of Folger's plans and subsequently secured a Congressional resolution that secured the land for Folger's use.

Mr. Folger thought through how his library would be used when it was installed in its new building and expressed his thoughts to those charged with realizing his ideas. "Our enterprise is first of all a Library, not a Museum. Most of our items are interesting because they are Shakespearian rather than artistic."

Meanwhile, he provided his architectural designer, Paul P. Cret, the inscriptions to be placed on the building: "the spelling and punctuation should be followed exactly."

" ... we suggest, for the three panels of the East Captiol Street front, beginning at the East Third Street end,

This therefore is the praise of Shakespeare,
that his drama is the mirrour of life.

His wit can no more lie hid, than it could be
lost. Reade him, therefore; and againe, and againe.

Thou art a moniment, without a tombe,
and art aliue still, while thy booke doth liue,
And we have wits to read, and praise to give.

For the East Second Street end,

For wisdomes sake, a word that all men loue.

We favor no inscription on the East Third Street end."