Difference between revisions of "A Midsummer Night's Dream"

This article is about Shakespeare's play. For other uses, see A Midsummer Night's Dream (disambiguation).

In A Midsummer Night's Dream, one of William Shakespeare's plays, Shakespeare stages the workings of love. Theseus and Hippolyta, about to marry, are figures from mythology. In the woods outside Theseus' Athens, two young men and two young women sort themselves out into couples—but not before they form first one love triangle, and then another.

Also in the woods, the king and queen of fairyland, Oberon and Titania, battle over custody of an orphan boy; Oberon uses magic to make Titania fall in love with a weaver named Bottom, whose head is temporarily transformed into a donkey by a hobgoblin or "puck," Robin Goodfellow. Finally, Bottom and his companions ineptly stage the tragedy of "Pyramus and Thisbe."

Shakespeare probably wrote A Midsummer Night's Dream in the mid-1590s. The play was published as a quarto in 1600. The main plot has no obvious sources, but sources for Pyramus and Thisbe include Ovid's Metamorphoses. Shakespeare may also have drawn on Chaucer's Canterbury Tales and Sir Thomas North's English translation of Plutarch's Lives.[1] 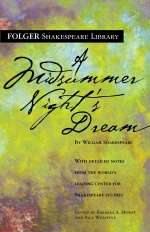 A Midsummer Night's Dream can be read online with Folger Digital Texts and purchased from Simon and Schuster. The play can also be purchased in Three Comedies, a collection that also includes The Taming of the Shrew and Twelfth Night.

The Folger owns over 60 stand-alone translations of A Midsummer Night's Dream in various languages (not including collected works). Cataloging of these works is ongoing as of early 2015, and many have full-level catalog records, but some works still have only partial records. Translations can be found Hamnet in by searching for "Translations"in the Genre/Form Term field, or by searching the Call Number (Left-Anchored) field for call numbers starting with PR2796 (see the list of Sh.Col. translations call numbers for specific language call numbers). Since not all translations are fully cataloged, some items may only turn up in one of these searches.

A Midsummer Night's Dream Audio Edition from Simon & Schuster available on CD and as an audio download. 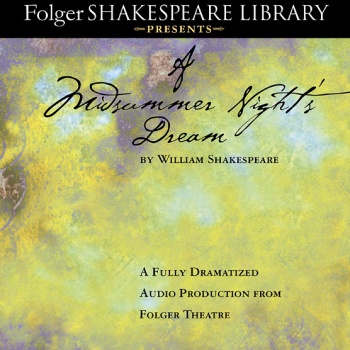 Listen to Marin Alsop's "Guide to A Midsummer Night's Dream" on NPR's Weekend Edition-Saturday. (May 24, 2014)