Difference between revisions of "A Celebration of Pablo Neruda: Forrest Gander and Javier Zamora (2017)"

The O.B. Hardison Poetry Series, with the support of the Embassy of Chile, presented Then Come Back: A Celebration of Pablo Neruda on February 14, 2017 at 7:30pm in the Folger's Elizabethan Theatre. Chilean poet Pablo Neruda was hailed by novelist Gabriel Garcia Marquez as “the greatest poet of the 20th century in any language.” This evening celebrated Neruda and the recent publication of his lost poems—poems he had composed on napkins, playbills, and notebooks—in Then Come Back. This new volume includes the poems in their original Spanish with English translations by Forrest Gander.

Reading Neruda’s poems and poems of their own inspired by him were Forrest Gander and poet Javier Zamora. The post–reading conversation was moderated by poet and translator Carlos Parada Ayala.

A desert reception followed with wines generously provided by the Embassy of Chile. 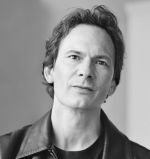 Gander has read for the O.B. Hardison Poetry series previously, on April 28, 2013.

Javier Zamora is the author of the poetry collection Unaccompanied (Copper Canyon Press, 2017), and his chapbook Nueve Años Inmigrantes/Nine Immigrant Years won the 2011 Organic Weapon Arts Contest. His poetry was featured in Best New Poets 2013 and has appeared in American Poetry Review, Ploughshares, Poetry magazine, the Kenyon Review, the New Republic, and elsewhere.

the sky crowns you,

etches into stone the song

of the cactus, the corolla burns

the world is born again.

From the book: Then Come Back: The Lost Neruda Poems