(Redirected from The Dering Manuscript)

The Dering Manuscript is the earliest extant manuscript text of any work of Shakespeare. Redacted around 1623 by Sir Edward Dering, the Dering MS presents a single-play redaction of Henry IV, Part 1 and Henry IV, Part 2. Discovered in 1844 at Surrenden Manor, Kent, the manuscript cuts some 3000 of Shakespeare's original text, including significant abridgment of the character of Falstaff. Henry Clay Folger purchased the manuscript in 1897, and it is now one of the most well known items in the Folger's collection. For more information, see this item’s Hamnet Record, or its Wikipedia Article. 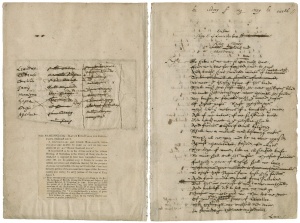 The first page of the Dering Manuscript. From LUNA, the Digital Image Collection.

The Dering Manuscript is a small folio volume with 55 leaves extant, and measuring 11.75 inches by 7.75 inches. The manuscript contains two large quires with six cancel leaves in between. The cancel leaves come from different stock paper, are cut differently, and are shorter at the spine than the leaves of the quires.

The first page of the manuscript is written by an unprofessional hand which has been identified as that of Sir Edward Dering (through comparison to Dering’s other writings). [1] The rest of the text is written in a hand known by scholars as Hand II. This hand has been identified as belonging to Samuel Carington, the scribe to whom Dering contracted the transcription of his redaction (according to Dering’s “Booke of Expenses”). [2] Notes and edits made by Hand I to the Hand II sections of the play show that Dering went through and re-revised after acquiring Carington’s transcription.[3]

Born in 1598 in the Tower of London, Sir Edward Dering, 1st Baronet was a man noted for his interest in theater and antiquary studies. After graduating Magdalene College, Cambridge, Dering devoted himself to the collection of manuscripts and scholarship. His production of Henry IV, Parts 1 and 2 – the text of which forms the Dering MS – is the earliest documented amateur performance of any Shakespeare play in England.[4] Having been caught on the losing side of the English Civil War, Dering died in the summer of 1644.

Dering attached a cast list on a piece of scratch paper from another of his amateur performances to the first page of the manuscript. The inclusion of this cast list from The Spanish Curate has allowed scholars to date the play between October 24 1622, when the play was entered into the Stationers’ Register, and the summer of 1624, when one of the cast members moved away.[5]

The manuscript was discovered in 1844 by the Reverend B. Larkin, who was looking for materials related to the earlier history of Kent in the collection of Sir Edward Dering, 8th Baronet (a descendant of the first Baronet), then owner of Surrenden Hall. Larkin immediately turned the manuscript over to the Shakespeare Society in London, who published a transcription and accompanying introduction by James Halliwell-Phillips in 1845. Halliwell-Phillipps acquired the manuscript soon afterwards, before selling it to George Greville, 4th Earl of Warwick in the 1860s. Upon Greville’s death, Henry Folger purchased the manuscript in 1897.

The Dering MS and the Folger

A facsimile edition was created by G.W. Williams and G.B. Evans for the Folger in 1974.