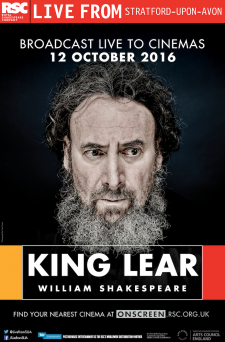 On Monday, December 5, 2016 as part of the Talks and Screenings at the Folger, the Folger hosted a screening of RSC Live from Stratford-upon-Avon: King Lear, a live cinema broadcast from the stage of the Royal Shakespeare Company, captured from Shakespeare's hometown of Stratford-upon-Avon, in their own Elizabethan Theatre. The production was directed by RSC Artistic Director Gregory Doran and starred Antony Sher as Lear.

King Lear has ruled for many years. As age begins to overtake him, he decides to divide his kingdom amongst his children, living out his days without the burden of power. Misjudging his children’s loyalty and finding himself alone in the wilderness, he is left to confront the mistakes of a life that has brought him to this point.