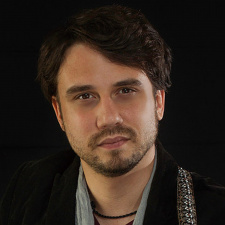 Free Folger Friday: "Play, Music!": An evening of songs from Shakespeare’s plays, one of the Talks and Screenings at the Folger, was held in the Folger Theatre on Friday, February 24, 2017 at 6:00pm.

Musician Brian Kay led a talk on music in Shakespeare's plays, including selections of music from As You Like It, alongside popular songs from the period. The performance also included a sing-along and an exploration of the instruments used.

Brian Kay is a modern-day troubadour. "Singing with a pure, centered sound and impeccable diction, he’s a natural-born storyteller." Brian performs throughout the US as a solo artist and with a number of critically acclaimed ensembles. He has appeared on more than 10 album releases at the age of 32. His musical ventures include a one-man show featuring the music of the Shakespearean era, co-directing a program of Mediterranean and North African music with Cleveland’s baroque orchestra Apollo’s Fire, and the release of his original music album Moonsong.