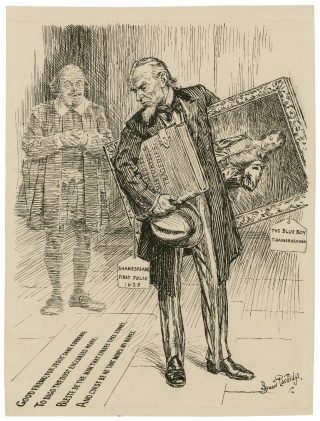 Fame, Fortune, & Theft: The Shakespeare First Folio, one of the Exhibitions at the Folger, opened June 3, 2011 and closed on September 3, 2011. The exhibition was curated by Anthony James West and Owen Williams.

The first collected edition of William Shakespeare’s plays is a celebrated volume known as the "First Folio." The First Folio earned its iconic status in part because it contains the plays of an author widely regarded as the world’s greatest playwright and because it is the first edition and sole source for half of those plays. Without the First Folio, we might not have such plays as Julius Caesar, Macbeth, and The Tempest. The Folio has been prized by both scholars and collectors. Scholars studied its text letter-by-letter; collectors drove its sales and increased its price. By the nineteenth century, it was so highly regarded that lists and censuses of copies were compiled; most Folios were rebound and repaired; and facsimile editions were produced for those who could not afford the real thing. As the First Folio gained prestige and copies traded hands through auctions and book dealers, the book spread around the globe. Copies can now be found as far from England as Japan and Australia. Over a third of the world’s copies reside within the walls of the Folger Shakespeare Library, having been collected by Henry Clay Folger between 1893 and 1928.

Although not a particularly rare book compared to other seventeenth century publications, good copies can command millions of dollars at auction; its high value, in turn, has encouraged theft. This article and the exhibition it accompanied explores the colorful history of the First Folio, from its modest beginnings in the seventeenth century to stories of theft and recovery of an idolized book, recounting how it came to mean so much across cultures and continents.

What Is a First Folio, and Why Is It Important? 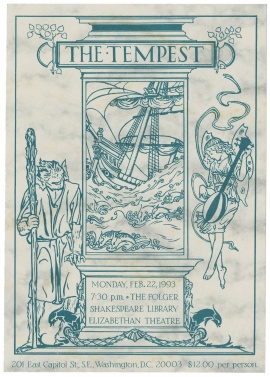 “First Folio” is shorthand for the “First Folio of Shakespeare’s dramatic works.” Quite simply, it refers to the first edition of Shakespeare’s collected plays. It is called a “Folio” because of the large-format size of the book, and Shakespeare was not the first author to have his collected works published in folio format. His contemporaries—poets and playwrights Samuel Daniel (1601), Edmund Spenser (1609), and Ben Jonson (1617)—also had literary folios published. But, setting him apart as the foremost playwright of his day, Shakespeare’s literary “First Folio” charted new ground in being composed entirely of plays. Since its publication in 1623, the book has gained cultural significance, becoming synonymous with Shakespeare himself. Despite the first folios of Jonson and Spenser, the term “First Folio” has taken on the weight of a proper noun, and for many, there is no question that “First Folio” means Mr. William Shakespeares comedies, histories, & tragedies.

Listen to Erin Blake discuss the Droeshout portrait of Shakespeare found in the First Folio.

Shakespeare’s First Folio isn’t terribly rare by antiquarian book standards, so what makes it so valuable? This is a question with many answers. For one, the First Folio is an important primary source for Shakespeare’s plays and the iconic image we recognize as Shakespeare. Its iconic cultural status, along with its infrequent appearance on the book market, make it more valuable than it would otherwise be. The current record sale price was set in October 2000, when a private collector purchased Abel Berland’s copy at Christie’s New York for $6.2 million.

A book this valuable is bound to attract thieves. In fact, three First Folios were stolen in the twentieth century—one from Williams College, Massachusetts in 1940; one from John Rylands Library at the University of Manchester, England in 1972; and one from the University of Durham in 1998. Sadly, only two of these copies have been recovered. The Williams College copy was returned the same year it was stolen, while the Durham copy remained at large for a decade. It was brought into the Folger in 2008 by a man who claimed he was a book dealer who had acquired the volume in Cuba. This image shows one of the identifying details Folger staff and others used to authenticate and identify the book. The documentary Stealing Shakespeare tells the story of the eccentric man at the center of the Durham First Folio case, and of the eventual return of the Folio to its home at Durham University (Call number: Cosin W.2.11 (=S.R.Safe)). Learn more about this copy in their video.

In the years immediately following its printing, the First Folio was not significantly more important than other literary works of its time, but it quickly gained importance. It was carefully read, altered, and adapted in the seventeenth century—especially in the Folio’s first decade and again at the end of the seventeenth century. Many First Folios have interesting annotations, including some that alter the text and others that mark up plays for performance. The fact that the First Folio was followed by the Second Folio in less than a decade demonstrates how much it was in demand.

This image is from a copy of the First Folio at Kodama Library, Meisei University, in Tokyo, Japan. The marginal notes, dating possibly as early as the 1620s, take up much of the available white space on the page and throughout the volume, giving a sense of the annotator’s close attention to the text. Starting in the early eighteenth century, the editing of Shakespeare became a major industry. Many Shakespeare editors owned a First Folio and used it to create new editions. Because there are no existing manuscripts of the plays, one cannot get nearer to Shakespeare’s original words than what’s printed in the First Folio; for this reason and others, close attention to the original text of the First Folio continues to this day.

Henry and Emily Folger as Collectors 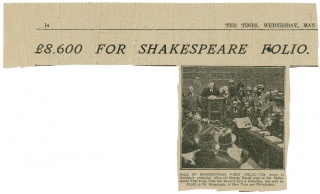 Henry and Emily Folger collected eighty-two First Folios—one third of the known 235 copies—in a span of just thirty-five years. Both the rate and the quantity of acquisition are unique in the antiquarian book collecting.

As a collector, Henry Folger was a shrewd negotiator. Though he sometimes received hostile responses to his inquiries, he forged ahead, and in the end, he often got the volume he was after. In 1905, Mr. Folger made a bid for the First Folio known as the “Deposit Copy”—the copy sent by printer William Jaggard to the Stationers’ Company in London in accordance with a 1611 law. Not realizing how important the first edition would become, the Bodelian Library had sold the Deposit Copy in the 1660s in favor of the more up-to-date Third Folio. The copy remained in private hands until 1905, when the owner received an offer from a London book dealer on behalf of an unidentified collector. The owner offered the Bodleian the chance to match the £3,000 bid. The Bodleian came up with the funds and the Deposit Copy returned to its original home—a happy ending to the story for all but the “mysterious millionaire” who wanted to buy the copy. That was, of course, Henry Folger.

Rosenbach orchestrated the purchase of one of Henry Folger’s finest copies—the Burdett-Coutts First Folio. Prior to Henry Folger, this Folio belonged to the estate of Baroness Angela Georgina Burdett-Coutts (1814–1906), (Baroness from 1871). A member of a banker’s family, Burdett-Coutts was the wealthiest unmarried heiress in England before she married her much younger American-born secretary. She purchased this copy (one of two First Folios she owned) in 1864 for a new record price. Her adoration for the volume was clear. In 1866, Burdett-Coutts commissioned a footed casket, carved out of wood from the felled Herne’s Oak. The casket has compartments which at one time housed the First Folio and a copy of the 1640 edition of Shakespeare’s poems, illustrating the extremes to which some owners went to protect and revere their Folios.

For more on the Folgers as collectors, visit the page on the Folger exhibition, A Shared Passion: Henry Clay Folger, Jr. and Emily Jordan Folger as Collectors.

Listen to Betsy Walsh discuss the Folgers and their main focus of their collecting.

Continuing Stories of the First Folio

400 years later, and new discoveries are still being made

For a book nearly 400 years old, and one as closely studied as the First Folio, one would think there are no new stories to tell. In fact, Folios continue to trade hands—though infrequently—and discoveries continue to be made. In 2003, Anthony James West published A New Worldwide Census of First Folios, documenting all known copies of the First Folio around the world. Since its publication, more copies have surfaced, bringing the grand total of known Folios to 232 at the time of this exhibition, and to 235 by April 2016. In his Census, West noted that one of the copies at the Folger Shakespeare Library had the manuscript notation “Constanter” on its title page. In 2009, with the help of Dutch scholars Dr. C. J. Verduin and Dr. Ad Leerintveld, and UV photographs of the First Folio’s title page taken by staff in the Folger’s conservation lab, this signature and another manuscript annotation were identified as the ownership marks of Dutch diplomat, poet, and book collector Constantine Huygens.

Huygens was known for signing and dating his books upon purchase. The faded, nearly invisible date “1647” can be seen above the publication details on the title page when viewed in ultra-violet light. Using the UV photography, and with the expertise of Dr. Leerintveld – the world’s leading authority on Huygens’s handwriting – Dr. West determined that Huygens owned this First Folio in 1647, thus making it the earliest known First Folio to leave England.

Listen to Frank Mowery discuss some of the challenges in the conservation of a First Folio.

The following items are listed chronologically according to the Hamnet catalog.

The Shakespeare First Folio was published in 1623. It is thought that up to 750 copies were printed; 233 are extant today. Many have made their way from their London birthplace to various locations around the globe. Explore this interactive map to trace the movement of First Folios around the world.

Watch scholars discuss the allure of the First Folio.

One First Folio of Shakespeare—accompanied by a touchscreen display of its contents—is always available to view at the Folger.

After this exhibition, in 2015, another Shakespeare First Folio was discovered on the shelves of a public library near Calais—the last English stronghold in the country. The tally of First Folios has been updated in the article above to account for this additional discovery which brings the total number of extant books to 233.

For additional information, please read one of the following articles from the New York Times, The Guardian, or The Telegraph.